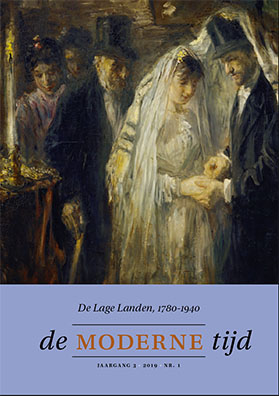 Wouter Egelmeers en Joris VandendriesscheDe redacteur en het buitenland. ‘Hergebruik’ van buitenlandse historische teksten in Nederlandse periodieken, 1780-1860 2-27
Abstract (EN)
Importing texts from abroad. Editors’ reuse of foreign historical texts in Dutch periodicals, 1780-1860.This article explores the ways in which the editors of five Dutch history journals and three magazines for general circulation copied historical texts from abroad, between 1780 and 1860. By comparing original texts with reprinted versions, we show that the editors’ work involved not only ‘passive’ duplication (reprinting in full), but also more active forms of intervention, from the selection of text fragments to their translation, modification or critical review. These varied editorial practices point to a broader creative process through which historical knowledge was tailored to an emerging and nationally-oriented academic audience. Editors here assumed the role of mediators, gatekeepers even in the sense that their judgment determined the very choice of texts. At a time when the study of history was evolving at both the national and international level, and when the relationship between actors making up the disciplinary field was also in flux, editors thus became influential figures.
Willemijn RubergExpertise in gerechtsdossiers. De praktijk van de forensische psychiatrie in Nederland, 1811-1930 28-50
Abstract (EN)
Expertise in case files. The practice of forensic psychiatry in the Netherlands, 1811-1930.Research on the history of Dutch forensic psychiatry has hardly taken into account how psychiatrists functioned in practice. This article, based on 485 court cases of (child)murder, rape and arson, provides an inventory of the role of psychiatrists in the courtroom. It distinguishes between three regimes of knowledge: a first regime in the first half of the nineteenth century, when there is much overlap between lay and expert knowledge on the mind; the second from ca. 1880, when increasingly reference is made to scientific concepts and reports became standardized; and a third regime around 1920, when an emphasis on scientific methods found its way into the reports. An analysis of verdicts shows that the judges often agreed with the expert reports. The relationship between the judges and psychiatrists can be qualified as one in which judges accorded room for experts, who, however, remained subservient to the judiciary.
Koos-jan de JagerWare godsdienstzin en strenge moraliteit 51-75
Abstract (EN)
True religion and stern morality. A thematic-historical analysis of the sermons of Chief Rabbi Tobias Tal (1847-1898).The process of integration of the Jewish community in modern Dutch society was accompanied by a change of Jewish homiletics in both content and form. This article presents the case of the Dutch Chief Rabbi Tobias Tal with the aim of showing how Jewish homiletics changed in the second half of the nineteenthcentury. Based on an analysis of his sermons, this article argues that Tal successfullycombined liberal-protestant ideals and homiletical forms with old Jewish thoughts.
Willem BantNederland door Colombiaanse ogen. De roman Una holandesa en América (1888) van Soledad Acosta de Samper 76-95
Abstract (EN)
The Netherlands through Colombian eyes. The novel Una holandesa en América (1888) by Soledad Acosta de Samper.In 1888, Soledad Acosta de Samper, a well-known writer and journalist in Colombia’s capital Bogotá, published the novel Una holandesa en América. This article presents an imagological analysis of how the Dutch and the Netherlands are representedin her novel, and discusses Acosta’s possible intentions in writing thisbook as well as her reasons for choosing a Dutch protagonist. It argues that the images of the Dutch were meant to serve as examples for Acosta’s Colombian audiencein a period in which the country was still engaged in nation building after gaining independence from Spain in 1819.
De Moderne Tijd
2017-2019
Jaargang 4 (2020)
Nr. 3-4: ‘Crisis en catastrofe’
Nr. 1-2: ‘Universitaire culturen’