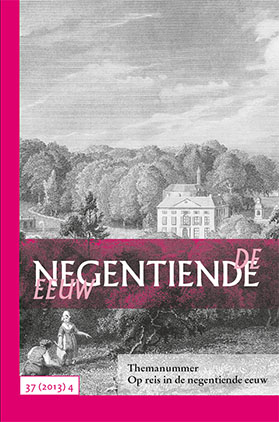 Jan Hein Furnée en Leonieke VermeerOp reis in de negentiende eeuw. Inleiding 257-263
Abstract (EN)
Travel in the nineteenth century. Introduction.Recent international scholarship has revised the traditional image of the nineteenth century as period of fundamental change between the premodern, elitist Grand Tour and the age of modern mass tourism. In Dutch historiography, Gerrit Verhoeven has recently shown that premodern travel culture in many ways included ‘modern’ travel patterns. However, the historiography of nineteenth-century Dutch travel culture is in many ways still in its infancy. This special issue of De Negentiende Eeuw presents some new contributions to the field, offering a quantitative analysis of travel egodocuments, two case studies of travel motives, attitudes and experiences in unpublished travel reports, and a study of the role of the first Dutch travel agency in the evolution of tourism. The overall conclusion is that in the nineteenth century travel culture certainly witnessed many important changes – newly emerging transportation technologies, advancement of travel industry, a modest broadening of the travelling public – but that the processes of modernisation and transformation were in many ways less dramatic than earlier historians have tended to suggest.
Anna P.H. GeurtsReizen en schrijven door Noord-Nederlanders. Een overzicht 264-288
Abstract (EN)
Travel and writing by Northern Netherlanders. An overview.Contrary to received wisdom, evidence from egodocuments suggests that Northern Netherlanders did not begin to travel more in the nineteenth century. Furthermore, the proportion of female travellers-writers remained small, those occupied at home hardly received any opportunities for travel, and the large majority outside the university-educated elite left little evidence of their travel experiences. These things only started to change around 1900. Meanwhile, the commercialisation of travel was not a nineteenth-century phenomenon, nor did journey timing and choice of destination standardise. Much of this can be explained by the fact that work remained a central travel motivation.
Willemijn KoningEen ‘bijna onbereikbare stralenkrans van vreugde en weelde’. Betrokkenheid en distantie in de Parijse stadsverkenningen van jonge Amsterdamse elitezonen, ca. 1850 289-311
Abstract (EN)
‘A nigh unattainable constellation of joy and wealth’. Engagement and distance during Parisian explorations by young Amsterdam elite sons, ca. 1850.Countless books and articles have been written about the travel experiences of the seventeenth and eighteenth century young elite during their so-called ‘Grand Tours’. However, the exploits of their nineteenth century counterparts have remained largely untold. This article is based upon the travelogues of three young men from the Dutch urban upper-class. It casts light on the nature of urban tourism at the time, to Paris in particular, and on tourists’ travel motivations, experiences and expectations. The article shows that although leisure was an important aspect of these journeys, the travelers were searching for profundity too. In the way these journeymen approached the people and places they encountered, they struck an interesting balance between keeping sufficient distance to properly observe, while also getting close enough to truly take their experiences to heart.
Mickey Hoyle‘Levensgenot en dolce far niënte in onze eeuw van haast en agitatie’. De ervaring van binnenlandse plezierreisjes door de Amsterdamse elite (casus Jan Boissevain, 1865) 312-330
Abstract (EN)
Escaping the city. Domestic pleasuretrips by the Amsterdam elite (the case of Jan Boissevain 1865).Most studies of nineteenth-century Dutch travel practices focus on the last remnants of the Grand Tour or on trips to spas or cultural capitals. The short domestic jaunts that Dutch urban elites made in this period have never been researched. The journey that Jan Boissevain made to Gelderland in 1865 is a telling case study that illustrates the unique category that these journeys formed in the broader spectrum of nineteenth-century tourism. In this article I will show how they differed not only from Dutch trips to other countries but also from trips made by foreign travellers.
Anke Stegehuis‘Met Lissone op reis!’ De betekenis van de eerste reisorganisator in het Nederlandse toerisme, 1876-1927 331-354
Abstract (EN)
‘Traveling with Lissone!’ The significance of the first tour operator in Dutch tourism, 1876-1927.Scholars have often stated that with the rise of travel agencies like that of Thomas Cook, mass tourism made its entrance in the nineteenth century. This article investigates that statement for the Netherlands based on information around its first major travel agency: Lissone & Zoon. That company, founded in 1876 and now merged into the billion dollar TUI Travel company, has made a significant contribution to the Dutch traveling culture. A first stock-tacking and analysis of Lissone’s travelers, prices and destinations leads to the conclusion that, although there is to a certain extent a broadening of the traveling public, travelling with Lissone would continue to be a fairly elitist affair, till the early decades of the twentieth century.
Boekzaal der geleerde wereld 355-359
De Moderne Tijd
2017-2019
Jaargang 4 (2020)
Nr. 3-4: ‘Crisis en catastrofe’
Nr. 1-2: ‘Universitaire culturen’