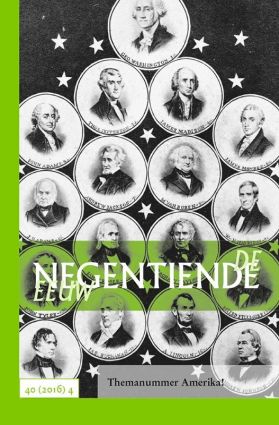 Janneke WeijermarsInleiding 249-250
Leen DresenLiefst met Burroughs zijn boekjes op zak. Amerikaanse natuurschrijvers en Jac. P. Thijsse 251-273
Abstract (EN)
On his way with John Burroughs. American nature writers and Jac. P. Thijsse.Jac. P. Thijsse was a key figure in the early nature protection movement in The Netherlands. When he started to promote his ideas on this subject, he was already well known as a nature writer. In his work he frequently expressed his admiration for American writers like John Burroughs, Henry David Thoreau and Ernest Thompson Seton. This article analyses how Thijsse used American authors and developments as a source of inspiration, and as examples that could help him to promote his own ideas about nature protection. Similarities are pointed out between Thijsse’s work and the writers mentioned above in three domains: a preference for studying nature close to home, around the town where one lives; camping vacations and outdoor sports, and establishing sanctuaries for wildlife as a practical way to protect nature.
Josephina de FouwAmerika in Dordrecht. Een allegorie op het verdrag van 1782 in een Dordtse koopmanswoning 274-290
Abstract (EN)
America in Dordrecht. An allegory on the treaty of 1782 in a merchant’s house.On 8 October 1782 the Dutch Republic and the United States signed a Treaty of Amity and Commerce in The Hague. This article focuses on a remarkable overdoor painting with an allegorical representation of the treaty. The painting, nowadays in the Rijksmuseum collection, was commissioned by Jan Rens Jansz. (1726-1798), a sugar refiner, for his house in Dordrecht. A study into the interior of the building reveals how Rens in a unique way expressed his political views in the privacy of his house. By looking at Rens’s personal circumstances and the political situation in Dordrecht, the article points out what drove Rens to propagate the treaty so explicitly. The case demonstrates the extent to which Dutch merchants were engaged in the treaty with the United States.
Robert VerhoogtDe tovenaar van de moderne tijd. Over de receptie van Thomas Alva Edison in Nederland in de negentiende eeuw 291-314
Abstract (EN)
The wizard of modern times. On the reception of Thomas Alva Edison in the Netherlands in the late nineteenth century.Since December 1877 Thomas Alva Edison surprised the world with his remarkable inventions like his phonograph and electric light bulb. Soon Edison became the great inventor in the late nineteenth century. He was world famous, but what was the reception of his life and work in the Netherlands? In what way were his inventions termed and appreciated here at the end of the nineteenth century? The introduction of new media inspired the theoretical and historical research of technology and innovation in society. Inspired by cultural historical analyses of technology this article explores the reception of the inventor Thomas Edison in Netherlands by analysing Dutch contemporary newspapers from the late nineteenth century. Edison himself almost certainly has never put one footstep in the Netherlands, but his life and inventions were closely followed as we can read in numerous articles, feuilletons, and advertisements. Popular topics were his famous factory in Menlo Park and his illustrious inventions: the phonograph and his electric light bulb. Soon Edison was recognized as an exceptional entrepreneur, a mythical giant, the wizard of Menlo Park, the electrifying artist, or ‘His Royal Highness’ Edison. Edison became a legendary inventor in the Netherlands thanks to his fascinating inventions and ideas concerning technological innovation in modern society.
Jenny ReynaertsBeelden van de Amerikaanse wildernis. De erfenis van de schilder Alexander Wüst (1837-1876) 315-333
Abstract (EN)
Images of the American wilderness. The heritage of the painter Alexander Wüst (1837-1876).Since 1891 the Dordrechts Museum houses some barely known paintings and watercolours by Alexander Wüst, born in Dordrecht but raised in New York. His landscapes depict the American landscape in the romantic manner. Later in life Wüst settled in Antwerp but kept his ties with New York. Thus, the artist takes up a unique position in the art world of both Europe and the USA. Though European spectators were familiar with the panoramas of American landscapes, Wüst promoted his own blend of romantic landscape and pioneer image. Did his career benefit from this reputation and the European curiosity for America?
Lieske TibbeHolland op z’n mooist in Amerika. De Wereldtentoonstelling van 1876 in Philadelphia 334-350
Abstract (EN)
Beautiful Holland in America. The 1876 International Exhibition in Philadelphia.In 1876, an International Exhibition was organized in Philadelphia to celebrate the one-hundredth anniversary of the Declaration of Independence. Dutch industry and commerce were reluctant to participate due to the risks and costs of transport. Dutch painters, by contrast, foresaw an interesting new market in the United States and were eager to send in their works. Consequently, the Dutch contribution to the exposition was dominated by civil engineering, education, book printing, farming, colonial exhibits, and the visual arts. Using catalogues, official reports, newspaper reviews, graphic illustrations and photographs, it is possible to reconstruct several of the Dutch presentations at the Exhibition. Due to the well-groomed exhibits of culture and art, and the absence of industry and trade, Holland was represented and perceived as a peaceful, public-spirited community, characterized by its many waters, pastures, grazing cows, mills and dunes, and unstained by modern life.
Boekzaal der geleerde wereld 351-357
De Moderne Tijd
2017-2020
Jaargang 4 (2020)
Nr. 3-4: ‘Crisis en catastrofe’
Nr. 1-2: ‘Universitaire culturen’