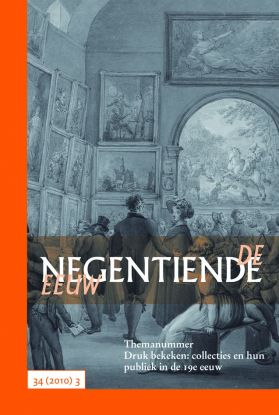 Redactioneel 183
Lieske Tibbe en Martin WeissPubliek gebruik van Nederlandse verzamelingen in de negentiende eeuw. Inleiding op het thema 184-192
Hieke HuistraWeg met Pottenkijkers! Hoe het publiek verdween uit het Leids anatomisch kabinet 193-208
Abstract (EN)
No more peeping in the Leiden Anatomical Collections. The disappearance of visitors.Tony Bennett claims that the public museum emerged in the nineteenth century, and that collections in earlier centuries were kept in closed spaces with strictly regulated access. I show that the Leiden anatomical collections do not fi t this picture. These collections were open to everyone until the nineteenth century, in which they were closed off for the general public. I argue that this closing off was a consequence of the changes in medical teaching, which infl uenced the housing and contents of the collection. Finally, I suggest Bennett’s thesis has more exceptions: other natural science collections probably developed in similar ways.
Huib J. ZuidervaartNatuurkundige instrumentenkabinetten. De opkomst en ondergang van een cultureel fenomeen 209-231
Abstract (EN)
The Cabinet for Experimental Philosophy in the Netherlands. The rise and fall of a cultural phenomenon.This paper investigates the development of Dutch cabinets for experimental philosophy. In the Netherlands, the phenomenon of a specialized collection of scientifi c instruments emerges in the second quarter of the eighteenth century and disappears from the scene in the last quarter of the nineteenth. During the time of its existence, the cabinet of experimental philosophy was used for several purposes, from a tool of devout religious contemplation, to a vehicle for status and amusement, and a device for education or research. Eventually, most instruments were disposed of as being obsolete. Some of the cabinets de physique were transformed into a physics laboratory; some instruments were preserved by accident in an attic, as relics. These items surfaced again at the beginning of the twentieth century, before starting a new life as an object of historical signifi cance.
Ellinoor Bergvelt en Claudia HörsterKunst en publiek in de Nederlandse rijksmusea voor oude kunst (1800-1896). Een vergelijking met Bennetts Birth of the Museum 232-248
Abstract (EN)
National Museums of Art in the Netherlands (1800-1896) and their public.Bennet’s assumptions in Birth of the Museum (1995) are compared with the Dutch national art museums in the eighteenth and nineteenth centuries. Dutch museums are different, for instance the artists as target group in the public are much more important than in other countries, while the public at large is barely considered. Nonetheless, the two Dutch national art museums exerted a high attractiveness amongst the general public, which is refl ected in their ever-growing and, within the Netherlands, unequalled visitor numbers. Moreover, research into the social composition of the Rijksmuseum public shows that art was by no means only accessible to an elite, on the contrary, at times the majority of the visitors was semi-skilled or even unskilled. Explanations for other Dutch deviations in public and government policy are found in a free art market since the 16th century and in the fact that only in 1795 a centralized form of government was founded.
Lieske TibbeVerheffing, nut, of pret maken? Georganiseerde bezoeken van werklieden aan nijverheidstentoonstellingen in de negentiende eeuw 249-268
Abstract (EN)
Public advancement or only for fun? Labour class visits to industrial exhibitions.Bennett’s concept of ‘the exhibitionary complex’, and its evolution as described by him, is held against initiatives in The Netherlands to involve labour class people in (inter)national industrial expositions. At the 1825 ‘Exhibition of Products of National Industry’ in Haarlem, participation of the – at the time very poor, underdeveloped and mostly unemployed – lower classes could only be noticed in relation to the various festivities fl anking the exposition. In 1861, during the ‘National Universal Exhibition’ in Haarlem, a call to employers and factory managers to organize visits of their labourers to the exposition, met a very modest response. A more large-scaled initiative to send delegations of skilled labourers to the 1867 World Fair in Paris resulted in some hand-written reports and a printed one – the last one also propagating labourers’ cooperative societies. In all three cases, elements of an ‘exhibitionary complex’ can be recognized; however, their consequences admit more than one interpretation.
Martin WeissDe gang naar toegankelijkheid. Publiek gebruik van Teylers Museum in de negentiende eeuw 269-285
Abstract (EN)
Going Public. The Public Usage of Teylers Museum in the 19th Century.This article analyses the public usage of Teylers Museum over the course of the nineteenth century: who had access to the collections, who actually visited the museum and what did they hope to gain from their visit? It is argued that over the course of the 19th century Teylers Museum gradually transformed from a research centre into a public art museum. The article addresses to which extent developments in Teylers Museums fi t into the general framework provided by Tony Bennett in his book The Birth of the Museum.
De Moderne Tijd
2017-2019
Jaargang 4 (2020)
Nr. 3-4: ‘Crisis en catastrofe’
Nr. 1-2: ‘Universitaire culturen’