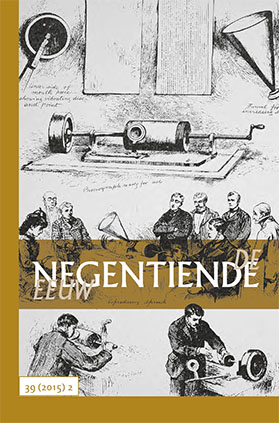 Tom WillaertMultatuli als schrijf- en spreekmachine. Over de vroege receptie van de fonograaf in de literatuur van de Lage Landen 97-117
Abstract (EN)
Multatuli as a writing and talking machine. On the early reception of the phonograph in the literature of the Low Countries.As late nineteenth-century culture saw itself transformed by the emergence of new media, celebrated Dutch writer Multatuli (1820-1887) too was radically reinventing himself. In 1877, he irrevocably shifted his activities from writing to public speaking. The formerly self-proclaimed ‘writing machine’ thus became a self-attested ‘talking machine’. Coincidentally, this metamorphosis took place at the time of his emotional encounter with an actual talking machine: Edison’s phonograph. Being the first device that could capture, store and replay sounds, this new medium posed a multi-pronged challenge to literature. International nineteenth-century literary discourse attests that the phonograph was for one thing perceived as relieving writers of one of their primary functions: to record the spoken word. For another, many authors were fascinated by the disembodied voices instated by the phonograph’s separation of sounds from their source. In this article, we explore how this double dynamic took hold of the Dutch realm of letters by analysing the correlations between Multatuli’s poetics and literary practices on the one hand and the functions of the phonograph on the other.
Tymen PeverelliKerken en kanonnen. Stedelijk verleden en historische genootschappen in Maastricht, 1853-1914 118-140
Abstract (EN)
Churches and cannons. Urban past and antiquarian societies in Maastricht, 1853-1914.Nineteenth-century Maastricht experienced what we might call a memory boom. This upsurge in historical interest was not a national or provincial affair, but was distinctly locally oriented. Central to this trend were two antiquarian societies, which were deeply imbedded in a network of amateur scholars. By analysing their antiquarian and historical writings, this article researches how the members of these societies cultivated the past of Maastricht. It shows how they evoked an urban selfimage based on the hand on a conception of the Early and High Middle Ages as the town’s golden age, and, on the other, on the remembrance of the sixteenth up to the eighteenth centuries as dramatic historical turning points. Their self-image was defined by its differentiation from other towns and nations, and by its integration into a larger regional or national whole. Thus, this research highlights the continuing relevance of urban identities for the elites of nineteenth-century Maastricht.
Pim den Dekker‘Weet, dat er niets indiscreeter is dan een andermans journaal te lezen’. De functies van negentiende-eeuwse jeugddagboeken 141-162
Abstract (EN)
‘Is there something more indiscreet than reading someone’s journal?’ The functions of the nineteenth-century youth diaries.In the nineteenth century, many children and adolescents kept a diary. In the Netherlands, studies about the diaries of children and adolescents are rare. This article investigates the functions served by such diaries, both implicit and explicit, by examining ten diaries with the hypotheses formulated in two studies: one study on adolescent diaries from nineteenth century France, and another on a Dutch child’s diary from the eighteenth century. This article will show that the diaries can serve multiple functions for their authors and that the primary function of a diary can change throughout its author’s writing process. A diary may be used for mnemonic reasons, to record the emotions of the author, or to help in his or her character development.
Frida van TilIn navolging van ‘de Schryfwyze van den beroemden Meiszner’. Adriaan Loosjes’ vaderlands-historische dialoog-romans nader bekeken 163-180
Abstract (EN)
In the footsteps of the ‘famous Meiszner’. Adriaan Loosjes’ national-historical dialogue novels scrutinized.Between 1790 and 1807 author, editor and bookseller Adriaan Loosjes Pz. wrote six so-called ‘dramatische voorstellingen’ or dialogue novels about people and topics of national and historical importance. Loosjes chose this genre, because in his opinion this was the best way to communicate his message of religious inequality and political intolerance. With the dialogue novel Loosjes followed in the footsteps of the German author August Gottlieb Meißner who wrote the novel Bianka Capello and also several other Germans who wrote in and about dialogues. Loosjes’ imitation of Meißner and the translations of a lot of other novels of the German author is also an example of the growing interest in Germany and its literature, especially around 1800.
Boekzaal der geleerde wereld 181-184
De Moderne Tijd
2017-2019
Jaargang 4 (2020)
Nr. 3-4: ‘Crisis en catastrofe’
Nr. 1-2: ‘Universitaire culturen’