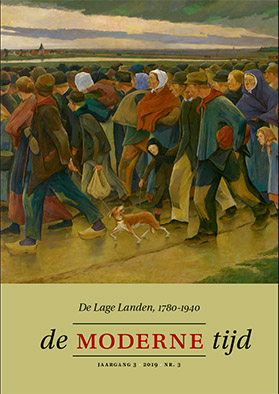 Van de redactieMigratie en identiteit. Ter inleiding 186-189
Anna RademakersJacobus Josephus Eeckhout. Wederwaardigheden van een Belgische schilder in Den Haag (1831-1844) 190-210
Abstract (EN)
Jacobus Josephus Eeckhout. A Belgian painter’s times in The Hague (1831-1844).In 1831, shortly after the outbreak of the Belgian Revolution, the Belgian painter Jacob Joseph Eeckhout moved from Brussels to The Hague. As a supporter of King Willem I, he no longer felt at ease in his homeland. Eeckhout remained in the Netherlands until 1843 and played an important role in the cultural life of The Hague. This article analyzes the The Hague episode in Eeckhout’s life in the light of the political developments of that time. To what extent did notions of nationality and national identity play a role in his artistic views and career?
Gertjan BroekEmigranten rond het Achterhuis van Anne Frank 211-226
Abstract (EN)
Migrants around Anne Frank’s Achterhuis.The story of Anne Frank, her family and her companions, hiding from persecution by the Nazi regime, is a well-known and – at a first glance – very Dutch one. The main divide between those in hiding and their helpers was that between being Jewish and being non-Jewish, which in those precarious times was of course the essential ‘divide’ imposed on the people of occupied Europe. But a closer look at the group of people around Anne seen from the perspective of migration and (national) identity produces different dividing lines and insights. Their life stories, converging in that one Amsterdam warehouse, reflect many aspects of early twentieth-century European history.
Caroline DrieënhuizenLeven(s) met objecten. De Europese elite van koloniaal Indonesië, haar verzamelingen en identificatie rond 1900 227-248
Abstract (EN)
Living with objects. The European elite of colonial Indonesia, its collections and identification around
1900.Many upper-class migrants from, and to, Dutch colonial Indonesia – often travelling back and forth – collected objects. By analysing the practice of collecting and the meaning these people ascribed to those artefacts, I will provide insight into the way personal, and eventually even collective, identities were formed. The manner in which objects were collected and displayed not only reflected the self-image of their owners in colonial and Dutch society, but may also have been active influences in those processes of (self)identification. The collection of objects, and the meaning ascribed to them, reflected the unequal power relations within colonial society, and simultaneously, was possible a strategy for marginalised people (such as European women) to liberate themselves from social inequality.
Marguérite Corporaal en Tom Sintobin‘Gemeen Volk’. Zigeuners in Europese streekliteratuur 249-285
Abstract (EN)
‘Common People’. Gypsies in European regional fiction.Regional fiction is a genre in which the tension between local and national cultures tends to play an important role. This article explores the representation of a category of characters that seems to escape that binary opposition: gipsies. More specifically, it analyzes six case studies from regional literature produced in Ireland and the Low Countries to find out whether we can speak of a transnational trope. Although the representation of gipsies in the case studies are different in several respects, there are also striking similarities. The most important one is that the gipsies are not just mere outsiders posing a threat to the regional community. Rather, paradoxically, they constitute a model for that local community regarding the preservation and regeneration of its own cultural values.
Boekzaal der geleerde wereld 286-296
De Moderne Tijd
2017-2019
Jaargang 4 (2020)
Nr. 3-4: ‘Crisis en catastrofe’
Nr. 1-2: ‘Universitaire culturen’