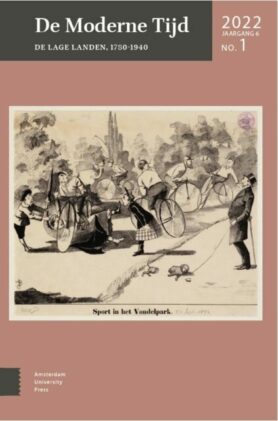 Jenna The‘Razende verkeersmonsters’: Strijd om de straat1-26
https://doi.org/10.5117/DMT2022.1.001.THE
Abstract (EN)
‘Racing traffic monsters’: Struggle on the street. Sensory and emotional negotiations in letters to the editor concerning cyclists and motorists in Amsterdam, 1880-1935 Between 1880 and 1935, the streets of Amsterdam transformed into increasingly busy traffic arteries. This article seeks to explain how this transformation came about by examining how the sensory and emotional experiences of Amsterdam’s street users changed with the arrival of the bicycle and the car. Through a sensory and emotional discourse analysis of letters to the editor of Amsterdam newspapers, it investigates which sensory and emotional stimuli road users experienced, how and why they developed sensory and emotional competences to deal with them, and why it took them so long to do so.
Laurien Hansma & Bart VerheijenOrangisme en Republikanisme27-50
https://doi.org/10.5117/DMT2022.1.002.HANS
Abstract (EN)
Orangism and Republicanism. Party quarrels after the Revolution, 1800-1806 This article describes the political debates that dominated the Batavian Republic after the Revolution. Following the failed Anglo-Russian invasion in 1799, a new constitution in 1801 and the Peace of Amiens in 1802 – in which Napoleon ended the revolutionary wars and created a new balance of power in Europe – a new form of Dutch national consciousness emerged. This led to a deepening of national cultural-historical awareness, and has been labelled by historians as a ‘nationalization of the revolution’. However, we argue that this process was not always based on political consensus or on an unequivocal apolitical ‘nationalization’. In fact, orangists and radical republicans continued to debate concepts like constitutionalism and sovereignty without showing much inclination towards reconciliation. This article focuses on these debates to show the different shades in organism and republicanism as well as their vividness, development and ongoing presence during the years 1800-1806.
Tim van der MeulenDe ironische generatie51-73
https://doi.org/10.5117/DMT2022.1.003.MEUL
Abstract (EN)
The ironical generation. An ideological positioning of the Kappeynian liberals (1860-1880) according to their ironical style Historians have struggled to pinpoint the Dutch Kappeynian liberal generation (1860-1880) ideologically. In this article I should like to show that the Kappeynians may be positioned as the ultimate examples of the doctrinal liberal ideals of Johan Thorbecke by assessing their ironical political style. I argue that their ironical style was part of a broad cultural ironical current in Dutch society in this period, which was expressed in the flourishing of debating clubs. This generation’s love for pure debate made them come closer to the doctrinal liberal ideal of parliamentary debate in the public interest than the actual doctrinal liberals themselves ever did.
Boekzaal der geleerde wereld (pp. 74-81)
De Moderne Tijd
2017-2020
Jaargang 4 (2020)
Nr. 3-4: ‘Crisis en catastrofe’
Nr. 1-2: ‘Universitaire culturen’