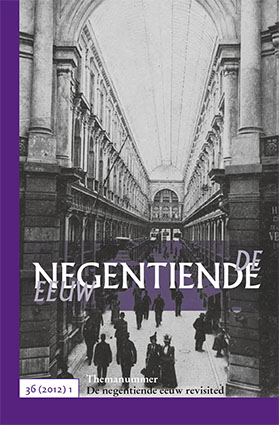 Jan Hein FurnéeBeleving van ruimte. De spatial turn en de negentiende eeuw 1-11
Boudien de Vries‘Een machtig middel om de beschaving vooruit te brengen’. De openbare bibliotheek in Groot-Brittannië en Nederland 12-27
Abstract (EN)
A powerful instrument to promote civilization. Public libraries in Great Britain and the Netherlands.The public library is an outstanding example of how the liberal middle class tried to reform society in Great Brittain, the Netherlands and Germany. In each country, the middle-classes regarded the public library as an instrument for self-improvement and cultural emancipation of the lower orders and, on the other hand, for social control of the masses. However, in comparison with British public libraries in great cities, which resembled outside and inside Tudor castles or Greek temples and other monuments, public libraries in the Netherlands and Germany were humble buildings. Moreover, in Britain public libraries were often part of large-scale projects which included a library, an art gallery and a museum.
The monumental exteriors and interiors of British libraries can easily be explained by the more articulate feelings of urban prestige and urban strife in Britain. This encouraged councillors to spend public money lavishly on cultural institutions. Apart from that, individual members of the aristocracy and the affluent middle class donated large sums to their own cities for the same purpose. In the Netherlands examples of the largesse of patronage were fewer, and if individuals donated money for cultural projects, it was seldom for a public library. Notwithstanding these differences, there is a striking similarity between Great Britain and the Netherlands in the spatial lay-out of the interior of the buildings. In both the Netherlands and Britain, space within the library mirrors middle-class ideas about culture, refinement, social structure and gender.
Bart Tritsmans en Ilja Van DammeAgorafobie in een moderniserende metropool? Gebruik, betekenis en aanleg van stadspleinen in negentiende-eeuws Antwerpen 28-46
Abstract (EN)
Agoraphobia in a modernizing metropolis? Use, meaning and planning of squares in nineteenth-century Antwerp.This article will point out how a focus on seemingly ordinary urban spaces in daily use, such as town squares, can provide unique insights into nineteenth-century society. It questions whether old and newly planned town squares lost their public importance in the modernizing landscape of the nineteenth-century city. This debate that was also raging at the end of the nineteenth century was closely linked to the ardent zeal for modern urban planning since Haussmann. This article ties in neatly with established ideas on nineteenth-century urban spaces as increasingly ‘regulated’ and ‘disciplined’ and thus heralding the so-called ‘fall of public man’. Our research, however, will make clear how political, economic, social and cultural life in nineteenth-century Antwerp remained intimately tied to town squares and public open spaces. We will present concrete empirical evidence regarding the continuous practical use and importance of old and newly urbanized town squares in the rapidly changing environment in the city of Antwerp.
Diederik SmitRegentenzaal, Balzaal of Paleis der Staten-Generaal? De plaats van het Nederlandse parlement in de negentiende eeuw 47-61
Abstract (EN)
The importance of history. The location of Dutch parliament in the 19th century.For centuries the Binnenhof in The Hague has been the central place of government in the Netherlands. However, since the dawn of the nineteenth century both the historical buildings of the Binnenhof and the place itself have been under discussion, and several proposals were made to restructure the complex. This article focuses on the debates concerning the place of the Dutch parliament from the Napoleonic era until the late nineteenth century. It shows why the parliament buildings were disputed in the first place, but also makes clear why the Binnenhof was eventually seen as a quintessential product of Dutch political culture.
Andreas StynenNatuurlijke verbeelding. Ontkieming van het stadsparkideaal 62-80
Abstract (EN)
Of parks and citizens. The illusions of a spatial category.The nineteenth century saw the birth of the modern public park. As the spatial incarnation of views on society and the position of mankind, it was subject to a series of drastic adjustments. Heirs to the aristocratic promenade, early examples were designed to accommodate the ritual of social parading. After 1850 Paris set the example for parks with more individualized pleasures, including immersion in a rural illusion as a proof of modern man’s mastery of the world. At the turn of the century, with increasing criticism of the urban condition, new parks embodied ideas of naturalness and physical participation.
De Moderne Tijd
2017-2020
Jaargang 4 (2020)
Nr. 3-4: ‘Crisis en catastrofe’
Nr. 1-2: ‘Universitaire culturen’