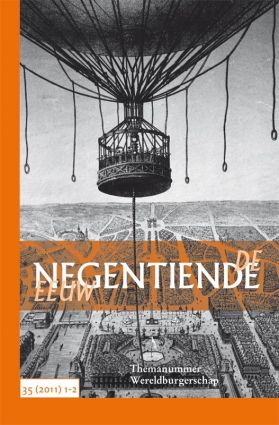 Eveline Koolhaas-GrosfeldWereldburgerschap in Nederland 1-9
Robert VerhoogtHet sublieme uitzicht op een grenzeloze wereld vanuit een luchtballon 10-33
Abstract (EN)
A sublime view of an endless world from a balloon.The invention of the balloon by the brothers Joseph and Etienne Montgofier caused a sensation in the late eighteenth and nineteenth centuries. Inspired by the experimental physics of the scientific revolution, balloonists organized public demonstrations. Up in the air the balloonists enjoyed a sublime view of the world and reported their experiences in words and images. Jean-Pierre Blanchard was the first to cross the Channel between England and France in a balloon. He later travelled to several European countries to become the first balloonist to go up in a balloon. On July 12, 1785 he made Dutch aviation history by being the first to ascend in a balloon in this country. The adventures of Blanchard and other balloonists were a source of inspiration for popular writers like Edgar Allan Poe and Jules Verne. Additionally, the sublime view from a balloon inspired artists to create a wide variety of images. Thomas Baldwin produced the first image of the view from a balloon in 1785. Then came the bright lithographs by Arnout and the impressive painting by Victor Navlet. The famous photographer Nadar made the first photographs from the basket of a balloon, while his successor Eduard Spelterini produced superlative aerial views. He photographed the impressive Alps from above, the relics of ancient Egypt, and the modern goldmines in Transvaal, too. The invention of the balloon provided a new dimension to modern European culture in the late eighteenth and nineteenth centuries: the third dimension. The ascent of a balloon attracted thousands of people again and again. Balloonists literally floated across national borders, between heaven and earth; they reflected both Romanticism and the Enlightenment. They saw the world as a huge, coloured map, while enjoying a new, sublime view of a world without borders.
Leen DresenDe waardering voor kosmopolitisme van planten en dieren in de Nederlandse natuurjournalistiek, 1850-1910 34-58
Abstract (EN)
Plants and animals as cosmopolitans: changing evaluations among Dutch popularizers of science, 1850-1910.Metaphors of global citizenship were commonly used by Dutch popularizers of science during the nineteenth century to describe plants and animals that occur worldwide. Calling a species cosmopolitan was often intended as praise, but could also carry negative connotations. Using this practice as a cultural indicator, this article traces changes in the representation of cosmopolitan species in Dutch science popularization between 1850 and 1910. Before 1870, perceptions were predominantly positive (praising cosmopolitan species as closely related to humans), but after this date they became negative (preferring locally confined species as having more character and being true to their origins). After 1890, cosmopolitan species became more appreciated again, with the advent of a new generation of progressive writers. These changing perceptions seem to reflect broader cultural and political developments, but also discussions within the natural sciences, where doubts emerged about the cosmopolitan nature of mankind itself.
Lotte JensenWereldburgerschap als verzetsdaad. Kosmopolitisme en patriottisme bij Jan Fredrik Helmers 59-72
Abstract (EN)
Cosmopolitanism as resistance. Cosmopolitanism and patriotism in the work of Jan Fredrik Helmers.The Amsterdam poet Jan Fredrik Helmers (1767-1813) is best known for his influential national epic De Hollandsche natie (The Dutch nation, 1812). Yet, he also propagated cosmopolitanism. This article seeks to explain this paradoxical combination of patriotism and cosmopolitanism. First, the philosophical, religious and cultural background of Helmer’s cosmopolitanism is analysed. His ideas were clearly influenced by Enlightenment thinkers, such as Wieland, Kant and Foster. Also, ideas of freemasonry resonated in his poems. Second, it is argued that actual political circumstances had a decisive impact on his thought. His cosmopolitanism can be interpreted as a protest against Napoleonic tyranny. At the same time growing French influence also posed a serious threat to the Dutch nation, which inspired patriotism in the poet.
Arnold LubbersHet Noord-Nederlandse leesgezelschap in het Verenigd Koninkrijk der Nederlanden. Broedplaats voor nationalisme en/of wereldburgerschap? 73-91
Abstract (EN)
The Northern Dutch book club in the United Kingdom of the Netherlands. Breeding ground for nationalism and/or world citizenship?.Researchers have suggested that during the years of the United Kingdom of the Netherlands (1815-1830) nationalism was omnipresent in literature. Immediately after the Belgian secession in 1830, though, Dutch author Van der Hoop jr. claims that a sort of world citizenship had been a dominant theme. To find out whether either books containing ideology were actually being read in those years, this article undertakes an analysis of the literary consumption of voluntary organizations. An examination of books and magazines bought by Northern Dutch book clubs indicates that the acquisitions favoured neither ideology. On the contrary: books containing outspoken ideology seem to have been purposely avoided in favour of recreational reading.
Jan OosterholtNeopatriottisme of neokosmopolitisme? R.C. Bakhuizen van den Brink en de (on-)kritiek van zijn tijd 92-103
Abstract (EN)
Neopatriotism or Neocosmopolitanism? R.C. Bakhuizen van den Brink and the (non)criticism of his age.The ideology of the Dutch periodical De Gids has been characterized as ‘neopatriotic’, but one could argue that it could be described as neocosmopolitan as well, depending on whether one wants to lay emphasis on a striving for a national culture or on the urge to take part in contemporary international movements. The paradox of this ‘international nationalism’ can be found in the criticism of Bakhuizen van den Brink: he denounces the chauvinism of an older generation and pleads for a combination of openness to foreign developments with a striving for an original Dutch contribution to European culture. His criticism against the ‘Old School’ manifests itself particularly in a new concept of (literary) criticism, with particular regard to the critic’s style of writing.
De Moderne Tijd
2017-2020
Jaargang 4 (2020)
Nr. 3-4: ‘Crisis en catastrofe’
Nr. 1-2: ‘Universitaire culturen’