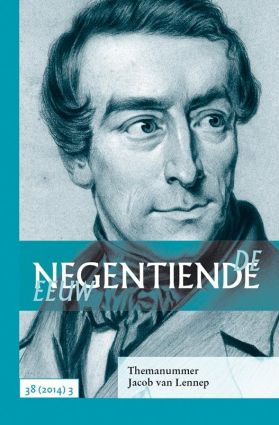 Jan Rock en Janneke WeijermarsJacob van Lennep. Een oog op Verlichting, historiezucht en Romantiek 129-132
Abstract (EN)
Jacob van Lennep. Giving an eye to Enlightenment, historicism and Romanticism.Rather than aiming at an elegy or a biography of Jacob van Lennep (1802- 1868), the popular nineteenth-century Dutch poet and novelist, this special issue of De Negentiende Eeuw takes Van Lennep’s life and work only as viewpoints on nineteenth-century Dutch culture and society as a whole. It consists of the texts of five Jacob van Lennep Lectures, held in Amsterdam since 2009. Generally speaking, the articles discuss three themes: the role of a literary author in public debate and society, the applicability of the concept of ‘Romanticism’ to the Netherlands, and some intellectual forms of historicism from the Netherlands and Europe.
Marita MathijsenHet uitwendige schrijverschap. Jacob van Lennep als publieke figuur 133-143
Abstract (EN)
An extraneous literary authorship. Jacob van Lennep as a public figure.Opinions keep diverging over whether or not literary authors ought to engage themselves socio-politically. Nineteenth century authors at any rate regarded themselves as charged in the first place with the task of bringing about social change. Even so they might also take the position of a romantic at the sidelines of society. Jacob van Lennep embodies both aspects of literary authorhood. He exploits his position as a highly reputed novelist and essayist to persuade society of his vision and to bring about real improvement. With implacable energy he takes initiatives, some of which are profitable even today. But he is at the same time a free, romantic individual who defines his own norms, as appa rent in the dual morality that marks his everyday life.
Joep LeerssenVan Lennep als romanticus 144-155
Abstract (EN)
Van Lennep as a romantic.Did Romanticism exist in Holland, and if so, was Jacob van Lennep a romantic? Both possibilities have long been denied by literary critics and literary historians, who accentuated either the Movement of 1880 or an isolated, protestant and bourgeois culture in the Netherlands. When Byronic or Promethean narrowings of the concept of Romanticism are replaced, however, by a more intellectual definition, Van Lennep appears as a prominent representative of the European romantic generation. The influence of Walter Scott on his historical novels becomes unmistakable and his interdisciplinary commitment to vernacular culture and the national past can be paired with European romantic historicism and the public cultivation of culture.
Peter RaedtsDe liberale Middeleeuwen 156-184
Abstract (EN)
The liberal Middle Ages.Not only conservative, but also liberal historians constructed continuities between the European Middle Ages and the modern era. While the former stressed the medieval sense of community, fidelity and faith, the latter pointed at the progress made in commerce, freedom and citizenship during these centuries. Some of the most prominent eighteenth- and nineteenth-century historians are discussed here, from Robertson in Scotland to Heine and Luden in Germany. Particular attention is given to French historians interpreting the Revolution as a part of their country’s history and to the still common idea that England developed organically from medieval to modern times, both in politics and religion.
Wessel KrulHet raadsel van de Nederlandse Romantiek 185-202
Abstract (EN)
The riddle of Dutch Romanticism.In the Netherlands, the use of Romanticism as a general designation for the first half of the nineteenth century presents a specific problem. The Dutch Romantics had explicit ideas about international Romanticism, and they rejected it in unambiguous terms. The painter Cornelis Kruseman (1797-1857) and the poet David Jacob van Lennep (1774-1853) are taken as examples of this ‘riddle of Dutch Romanticism’. Like all Romanticisms, Dutch Romanticism wanted to be a national movement. But as soon as it tried to be national, it had to deny most of the elements that characterized it as Romanticism.
Jo TollebeekEen gedwongen plooi. Geschiedenis schrijven in het Verenigd Koninkrijk van Willem I 203-223
Abstract (EN)
Bending and bowing. Writing history in the United Kingdom of the Netherlands.In 1826 king Willem I incited by Royal Decree all men of letters in the United Kingdom of the Netherlands to propose a new history of his realm and its components. Among the 44 competitors were famous men, like Groen van Prinsterer, Moke and De Reiffenberg. Some of them met the king’s wishes for a historically rooted national unity, but the majority let concerns of history prevail. They disagreed nonetheless, over conflicts and discord found in the past, but also over the form a new national history should take. Some outlined traditional, rhetorical and didactical histories, others formulated Enlightened aims of usefulness, only a few proposed Romantic stories reviving the past in all its colours. Eventually, the competition had no winner. Unanimity existed only on the importance of archival documentation, making plans for the publication of historical sources, submitted by Thorbecke and Gachard, the most renowned in later times.
De Moderne Tijd
2017-2020
Jaargang 4 (2020)
Nr. 3-4: ‘Crisis en catastrofe’
Nr. 1-2: ‘Universitaire culturen’