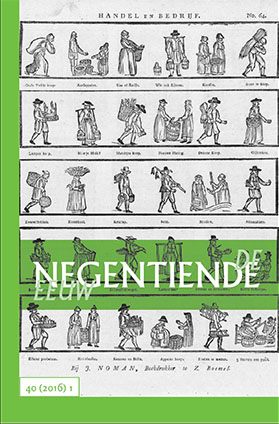 Gert-Jan Johannes en Inger Leemans‘Van den handel zou hij zingen’. Nederlandse koophandelsgedichten, 1770-1830 1-33
Abstract (EN)
‘His song would be of trade, and of trade he sang’. Dutch poems on trade 1770-1830.In the seventeenth-century Dutch Republic, the mercantile nation par excellence, poets often devoted some laudatory stanzas to trade and commerce, to Amsterdam as ‘the merchants’ capital’ or to individual merchants and their virtues. It is only from the second half of the eighteenth century onwards, however, that we find poems that take trade and commerce as their central theme. This article analyses around twelve of these poems dating from the last decades of the eighteenth and the first decades of the nineteenth century. These sometimes exceptionally long works sing the praise of trade as a historical phenomenon, dwelling on developments from primordial times up to their own age. In the nineteenth-century poems, trade even develops into a divine power, the primum movens and driving force in the history of human civilization. Two central themes of Enlightenment economics gain prominence here: the Universal Economy Doctrine and the idea of doux commerce. While it has often been stated that the Dutch were hardly interested in economics before the end of the nineteenth century, these poems demonstrate that, whereas purely academic discourse on economy was scarce indeed, contemporary international ideas on economy were in fact widespread in the Netherlands. In a popularized and poetic guise they could count on the lively interest of many.
Jolanda van der LeeSodoms zondaar of schepsel Gods? Negentiende-eeuwse homoseksuelen over hun relatie met God 34-53
Abstract (EN)
Sinner of Sodom or Gods creature? Nineteenth-century homosexuals about their relationship with God.In the nineteenth century psychiatrists established the existence of the homosexual identity and developed theories about its causes and characteristics. An important source of information they used were autobiographies of so called urnings (homosexuals). Given the fact that today most Christians accept the existence of the homosexual identity, it seems that over time the developed medical discourse on homosexuality has been given a place within the discourse of the Christian faith. This article focuses on the first phase of this ‘processing’ of the medical discourse. By analyzing five autobiographies of nineteenth century urnings that were published in the Netherlands I discuss how the authors coped with the combination of their homosexual identity and their religion. All authors supply evidence of regarding themselves as innate homosexuals and, as such, as a creature of God. They show different views about the goal He has with their creation – an unknown one, a special favor or a punishment – but they are all convinced that they are no sinner in His eyes, even if they are sexually active. However, the biblical sin of Sodomy – anal penetration – is assessed negatively.
Toos StrengLeest, maar leest met mate. Over de houding tegenover het lezen in de eerste decennia van de negentiende eeuw 54-76
Abstract (EN)
Read, but read in moderation. Opinions on reading in the first half of the nineteenth century.According to Marita Mathijsen before 1850 a reading revolution in The Netherlands was hold off because the spiritual authorities (pastors and priests) who controlled the public opinion turned against the enlightened liberal belief that literature, like all forms of knowledge, would lead to a better world. Only since the thirties reading would no longer be generally contested but tolerated (gedoogd). However, the term ‘gedogen’ (acquiescence) is only appropriate when speaking of an apparently ineradicable evil that was secretly tolerated. Until 1825 this was only the standard view in Catholic circles. Outside these circles reading was considered a legitimate human need, which was put at the disposal of the attainment of domestic happiness. With the notable exception of the young Da Costa and other orthodox Protestants in the twenties the Protestant public opinion in the first decades of the nineteenth century did not condemn reading in general. The watchword was not: Thou shalt not read, but: Read, but read in moderation. The ministers took their educational role seriously and fought against thoughtless reading, overmuch reading and the reading of the wrong books. The reading revolution hold off, but not for ideological reasons. The need existed, but the financial means lacked to fulfill the needs.
Boekzaal der geleerde wereld 77-80
De Moderne Tijd
2017-2019
Jaargang 4 (2020)
Nr. 3-4: ‘Crisis en catastrofe’
Nr. 1-2: ‘Universitaire culturen’