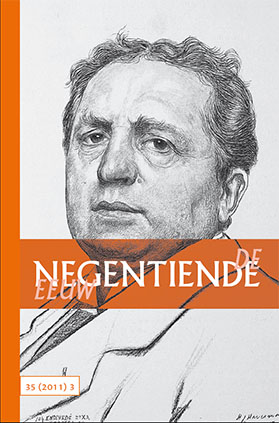 Henk te VeldeDe Risorgimento in Nederland. Binnenlandse tegenstellingen rond een internationale kwestie 105-118
Abstract (EN)
The Risorgimento in the Netherlands. Domestic controversies surrounding an international Issue.The Italian Risorgimento did not affect the Netherlands in the same way as the German unification did. Paradoxically however, it had important consequences for Dutch domestic politics. Reactions to the Risorgimento prefigured new alignments in domestic politics that would only really become apparent almost a decade later. Liberals and Catholics were still united against Conservatives and orthodox Protestants. The Italian question brought new dividing lines to the surface. Liberals supported the Italian struggle for a national and government and they cheered its hero Garibaldi. Conservatives agreed to a surprising degree. On the other hand, Catholics, and orthodox Protestants as well, abhorred the destruction of the legitimate order in Italy and considered the violence of the revolutionary uprising an outrage against society.
Jolijn GroothuizenTot hier en niet verder!? De kiesrechtbetoging van 20 september 1885 119-138
Abstract (EN)
‘Up to here and no further!?’ The suffrage demonstration of September 20th, 1885.In the historiography of socialism in the Netherlands, the suffrage demonstration of September 20th, 1885 has mostly been depicted in a negative way. When we take a closer look at the primary sources available however, we see how socialists not only used indecent, extra-judicialt actions, but also wielded civil methods in their struggle for democracy. They planned an orderly demonstration and asked the Dutch government for universal suffrage through a motion that was modelled on those debated in the Dutch parliament. The message that the motion contained however, was threatening and revolutionary. The government ignored the socialists’ request and the socialists consequently took their refuge to more violent methods. The transition from direct action to the carefully planned opposition of a social movement had proved to be difficult, and the confusion of September 1885 once more led to a period of uncivilized action.
Arko van HeldenDe ‘kleine luyden’ van Abraham Kuyper – een vorm van populistische retoriek? 139-153
Abstract (EN)
Abraham Kuypers ‘little men’ or ‘little people’ (kleine luyden) as a form of populist rhetoric.According to the British political scientist Margaret Canovan political populism is anti-elitist, exalts ‘the people’ and stresses the pathos of ‘the little man’. The Dutch Neo-Calvinist political leader Kuyper introduced the expression kleine luyden – allegedly a historical quotation from William of Orange – to express his antipathy of the liberal and conservative elite and to frame his Calvinist sympathizers as the real patriots. They form his Dutch-Reformed ‘heartland’ (a concept by Paul Taggart). This contribution analyses Kuypers uncommonly populist use of the expression kleine luyden. It was also an original, powerful expression to lift up the Calvinist little men and mobilize their little force into a strong political party.
Rick HoningsEen student bij de grijze heren. Nicolaas Beets en de Hollandsche Maatschappij van Fraaije Kunsten en Wetenschappen 154-168
Abstract (EN)
A student among grey gentlemen. Nicolaas Beets and the Dutch Society of Fine Arts and Sciences.During the first decades of the 19th century literary life took place within the literary societies, such as the Dutch Society of Fine Arts and Sciences, founded in 1800. In the early 19th century it was one of the most prominent literary authorities in the Northern Netherlands. According to the dominant historiography of Van den Berg the societies lost their importance after 1830. This view is mainly based on critical remarks of Jacob Geel. But is this a correct representation of the real situation? In this article I want to adjust this dominant representation by focusing on the career of the student-author Nicolaas Beets.
De Moderne Tijd
2017-2019
Jaargang 4 (2020)
Nr. 3-4: ‘Crisis en catastrofe’
Nr. 1-2: ‘Universitaire culturen’