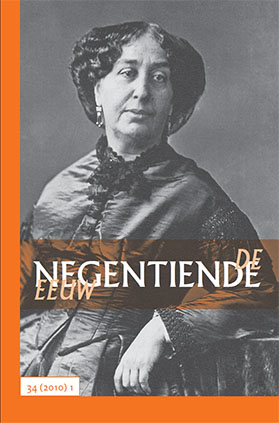 Redactioneel 1-2
Lotte JensenEen mijnenveld vol explosieven. Kritiek in Nederlandse toneeltijdschriften rond 1800 3-25
Abstract (EN)
A minefield of explosives. Criticism in Dutch theatre periodicals around 1800.This article discusses the way criticism was practised in Dutch theatre periodicals around 1800. It focuses on four periodicals: De Amsteldamsche Nationale Schouwburg (1795), De Tooneelmatige Roskam (1799), Amstels Schouwtooneel (1808-1809), and De Tooneelkijker (1815-1919). The most remarkable characteristic is their combative tone: they are fi lled with quarrels, arguments and personal confl icts. This might be explained by the fact that they were written by and for a small circle of theatre lovers, fertile ground for confl icts of interests. The propagated ideal of impartial criticism therefore was a contradiction in terms. However, the critics seemed to agree about one thing, namely that the decline of Dutch theatre was caused by the abundance of foreign plays. They had one enemy in common: the German writer August von Kotzebue. All internal confl icts were drowned out by the shared disapproval of his work.
Wim CosterTwee soorten van liberalisme. Thorbecke en Sloet tot Oldhuis ‘aan de hefboom tot welvaart’ 26-48
Abstract (EN)
Two kinds of liberalism. Thorbecke and Sloet ‘at the lever of prosperity’.This article explores the question whether Bartholomeus Willem Anne Elisa baron Sloet tot Oldhuis (1807-1884) can be considered as a doctrinal liberal or ‘Thorbeckian’. The question is answered by reference to some specifi c topics he often discussed with Thorbecke, namely economy (especially his vision on poor relief, wages and excise), knowledge and the spread of knowledge, infrastructure and colonial politics. The article also deals with the political style of both men and the scope of their political arenas. It shows that Sloet – because of his fi rm belief in the laws of nature, the organic arrangement and the functioning of creation and ‘the invisible hand’ – can be called an ‘ecological liberal’, and at the same time has his own style in an arena that’s not limited to the political scene in The Hague.
Niels MatheveTempel of magazijn. Belgische volksvertegenwoordigers over het museumwezen (1890-1900) 49-69
Abstract (EN)
Temple or storehouse? Belgian deputies concerning museum policy (1890-1900).At the end of the nineteenth century, the Belgian Chamber of Representatives started paying more attention to cultural topics. This article studies the topics that aroused debate. The purchasing policy of Belgian national museums was often criticised because of their inability to save money. Furthermore, deputies devoted several debates to the purpose of museums. These debates suggest that there were strongly diverging opinions concerning the policy of Belgian museums. Therefore, the idea of a general breakthrough of democratisation (at least concerning museum policy) at the end of the nineteenth century cannot be confi rmed. More conservative speakers still dominated the ‘cultural theatre’ in Belgium, at least until the beginning of the twentieth century.
Suzan van DijkGeorge Sand in Nederland. Ontwikkelingen in het receptieonderzoek 70-93
Abstract (EN)
George Sand in the Netherlands. Developments in reception studies.The current focus of Dutch reception studies seems to be on translations. They are often considered the principal source of information on and testimony to reception. However, the case of George Sand’s reception in the Netherlands illustrates the necessity of including other reception sources when researching literary connections between countries. Possibly this applies in particular to works (1) written in French, the lingua franca throughout Europe in the eighteenth and nineteenth centuries, and (2) published by controversial authors, whose critics in other countries disapproved of their translation. Gender issues probably had a role here – most certainly for George Sand, whose own behaviour and that of her heroines did not always correspond to prevalent norms.
Aankondigingen en mededelingen 94-96
De Moderne Tijd
2017-2020
Jaargang 4 (2020)
Nr. 3-4: ‘Crisis en catastrofe’
Nr. 1-2: ‘Universitaire culturen’