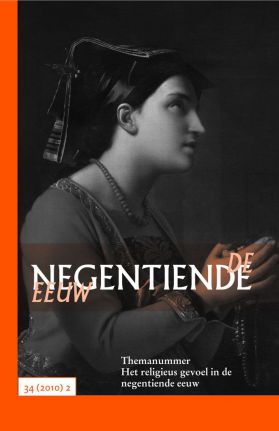 Redactioneel 97-98
Patrick VandermeerschHet beroep op het religieuze gevoel in de negentiende eeuw 99-112
Abstract (EN)
Appeals to religious feeling in the nineteenth century.The conviction that feeling was crucial for religion is epitomized by the work of Friedrich Schleiermacher. At around the same time, René de Chateaubriand had already written about the way feeling could be used. The nineteenth-century discussion about the various types of religious feeling has close connections with the way religion was made instrumental to the nationalist or humanitarian needs of the newly emerging society. A tension remained, too, between rationalist theology and pleas for the importance of feeling, and it is too simple to equate this tension with an opposition between Protestantism and Catholicism. As Dutch revivalism (Réveil) and Belgian liberal Catholicism demonstrate, the religious history of the Low Countries deserves a separate treatment.
Peter NissenHet verlangen naar de hemel. Culturele representaties van oude en nieuwe vormen van religiositeit in de negentiende eeuw 113-124
Abstract (EN)
Longing for heaven. Cultural representations of old and new forms of religiosity in the nineteenth century.The 20th century in European cultural history has been described as the age of the disappearance of heaven. This disappearance was already visible in the 19th century, not as the result of a simple linear process of secularization, but through a more complex transformation and migration of religion. This process leads to the paradox that in an age in which heaven seemed to disappear in some domains of life, the longing for heaven simultaneously occurred in other domains. In Dutch cultural history, this is especially true for the early decades of the century, with a late resonance of Romanticism in art and philosophy, and for the fin de siècle, with a strong interest in Swedenborg’s ‘knowledge’ of the secrets of heaven, a vigorous desire for communication with the souls of the deceased, both in spiritist circles and in popular Roman Catholicism, and a lively fascination with the spiritual and the mystical in art and literature.
Alpita de JongGodsdienst als ‘kittelig plek’ aan het lichaam der natie. Joast Halbertsma (1789-1869) en het religieus gevoel in de vroege negentiende eeuw 125-139
Abstract (EN)
Religion as ‘ticklish spot’ on the body of the nation. Joast Halbertsma (1789-1869) and religious feeling in the early nineteenth century.Focusing on the complexities and paradoxes of religion in the early nineteenth century, the Mennonite clergyman Joast Halbertsma is of great help to modern historians. Not only his texts on religious topics like his histories of the Mennonites and of Buddhism, but also his essays on languages, his Frisian tales, and his correspondence with distinguished men of letters and politicians comment on religious sensitivities of his time and reveal Halbertsma’s attitude towards religion and the relation between religion and politics.
Marijke Huisman‘Schrijf, want deze woorden zijn getrouw en waarachtig’. Religie, gender en autobiografi sch schrijverschap in de negentiende eeuw 140-154
Abstract (EN)
‘Write, because these words are faithful and true’. Religion, gender and autobiographical authorship in the 19th century.For women of the nineteenth-century, the motive of a religious vocation was an important and successful instrument to justify a public life. This article argues that religious thoughts and experiences facilitated women’s autobiography as well. During the century, the subgenre of conversion narrative was more accessible to Dutch women autobiographers than the favorable genre of historical memoirs. However, women’s presence within the tradition of conversion narrative did not necessarily further autobiographical authorship: many women’s narratives were ghostwritten, and virtually all were published posthumously. As an exception to the rule, the case of Doetje Reinsberg-Ypes (1840-1900) demonstrates to what extent the subgenre of conversion narrative entrapped women autobiographers striving for a place in public life and hence the domain of history.
Annemarie Houkes‘Daar moet gehandeld worden!’ Nieuwe religieuze belevenissen van orthodoxe protestanten, 1850-1900 155-163
Abstract (EN)
‘There should be action’. New religious experiences of orthodox Protestants, 1850-1900.Transformations in the nineteenth century public sphere are more closely linked with changes in religion, and the way in which people experienced their faith, than many historians realize. In the Netherlands, religious revivals attracted an increasing number of Protestants from 1830 onward. Conversion and the orthodox faith became directly connected with social activism. This article focuses on the various ways in which the new religious feeling took shape: Christian philanthropy and evangelization, church politics and different perceptions of citizenship and politics. For orthodox Protestants, religious feeling was the major incentive for public action. Their translation of religious feeling into action caused a lasting change in societal relations and public and political participation in the Netherlands.
Hans Knippenberg‘God dienen is mensen dienen’. Heilssoldaten en hun gevoel voor de onderkant van de samenleving, 1887-1912 164-182
Abstract (EN)
‘Serving God is serving men’. Salvationists and their feelings towards society’s lower classes, 1887-1912.Starting with their great example and general, the founder of the Salvation Army, William Booth, this paper describes the religious feelings, motivation and background of the fi rst Salvationists in the Netherlands and the reactions of Dutch society to the establishment of the Salvation Army in 1887. After the implementation of Booth’s worldwide social campaign in the 1890s, Dutch society shifted from an attitude of hesitation and disapproval to one of more appreciation, resulting in a rapid expansion to 94 Army corps and 336 offi cers by 1912.
De Moderne Tijd
2017-2020
Jaargang 4 (2020)
Nr. 3-4: ‘Crisis en catastrofe’
Nr. 1-2: ‘Universitaire culturen’